To share your memory on the wall of George Martinez, sign in using one of the following options:

Provide comfort for the family of George Martinez with a meaningful gesture of sympathy.

George was born in Roby, Texas January 31, 1949, to Ben and Lupe Martinez. He graduated from Hobbs High School in Hobbs, Texas in 1966, he attended Angelo State University and in 1969 he moved to Snyder, Texas where he met and married his Wife of 48 years Debra Richmond Martinez in 1970.
George was one of 7 men who started the American Magnesium Company in 1969. He was over the Electrolysis Department until his transition to the oilfield where he was employed by Union Oil Company of California/Unocal in Vincent, Texas. He retired after 23 years with Unocal but left retirement to pursue a career opportunity with Apache Corporation in Ira, Texas until 2012.
He was a member of the Ira Baptist Church and spent much time in the Bible memorizing scripture. George was much loved by his Family and Friends and will be greatly missed.

He is preceded in death by his Father Ben Martinez.

Philippians 3:20
"...but our citizenship is in Heaven, and from it, we await a Savior, The Lord Jesus Christ, who will transform our lowly body to be like his glorious body, by the power that enables him..."
Read Less

Provide comfort for the family by sending flowers

We encourage you to share your most beloved memories of George here, so that the family and other loved ones can always see it. You can upload cherished photographs, or share your favorite stories, and can even comment on those shared by others.

Jeff and Linda Helmcamp and Performance Wellhead & Frac Components have sent flowers to the family of George Ybarra Martinez.
Show you care by sending flowers

Posted Dec 19, 2018 at 09:03am
I’m so sorry for your recent loss. My deepest condolences to your family. Death of a loved one is never easy to endure, but you don’t have to go through it alone. Continue looking to God and you will always find comfort in him (2 Cor 1:3,4). He will soon destroy the enemy of death (1 Cor 15:26), and He will soon return our loved ones to us through the resurrection (John 5:28,29). Please visit JW.org and search “When Someone You Love Dies”, it helped me through some difficult times and I hope you can find comfort in it also.
Comment Share
Share via:
JH

Posted Dec 18, 2018 at 09:03am
Please accept our most heartfelt sympathies for your loss... Our thoughts are with you and your family during this difficult time.

Posted Dec 16, 2018 at 10:50pm
Prayers for strength and comfort for all the family of this good man.
Sincere condolences,
Gene and Peggy Trice Vernon
Comment Share
Share via:
MA

Posted Dec 16, 2018 at 08:01pm
My heartfelt sympathy on the loss of a Might Man of God. George always had a smile on his face and his Bible in his back pocket. May Gods strength and His peace be with you all at this time.
Shalom
Marvin Applin
Comment Share
Share via: 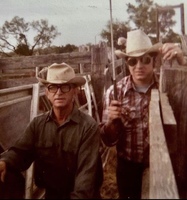 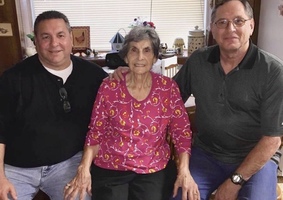 Brother George all dressed up in his boots with sisters, Becky and Rachel.
10
4
+6
Add Photos