To share your memory on the wall of Anne Ellen Henderson, sign in using one of the following options:

There are no events scheduled. You can still show your support by sending flowers directly to the family, or planting a memorial tree in memory of Anne Ellen Henderson.
Plant a Tree

We encourage you to share your most beloved memories of Anne Ellen Henderson here, so that the family and other loved ones can always see it. You can upload cherished photographs, or share your favorite stories, and can even comment on those shared by others.

Posted Sep 09, 2020 at 12:27pm
What a gal Anne was we had many a fun times enjoying our horses. Prayers for peace and understanding for her 3 Sons and their families.
Carolyn Kuss Watlington
Comment Share
Share via:
DS

Posted Sep 01, 2020 at 05:50pm
We loved your mother and your dad. Henceforth we love all of you, They as well as you have been special to our family. We are regretful that we will be unable to see you. We send our love and prayers to all.
Love Ford and Doris Spikes
Comment Share
Share via:
CL

Posted Aug 31, 2020 at 02:54pm
My best memories of Anne, I was about 13 when Charlie and Anne came into my life. Charlie would pick up Van and I and take us to Dunn. I helped Anne wash dishes, clean house, whatever had to be done so we could get outside to the horses. It was way more fun to do chores at their house than at home.
Sam, best horse ever, we spent many hours at the Hendersons. James Arthur came along, boy it was great, Anne needed a baby sitter, so she could run barrels. I had my very own baby doll to take care off. He was really special. Life moved on, Tommy came along, and then Will. Now a great thing happened, after my own two girls, I had a Baby boy named Brodie. Brodie and Will became friends and the Hendersons continued to be a Big part of my family! I cannot tell you how many times I looked to Anne and Charlie for advice. They were like another set of parents to me and I will treasure every memory I have of the Henderson Family. Love to you boys, Your are in my prayers and if ever you need me, I hope you will call on me, just like I knew I could call on Charlie and Anne Love, Shann (Spikes) Pierce

Posted Aug 31, 2020 at 12:58pm
Prayers for strength and comfort for all the family of this special lady
Fond memories of her nursing and barrel racing careers!
Sincere condolences from
Peggy Trice Vernon.
Comment Share
Share via: 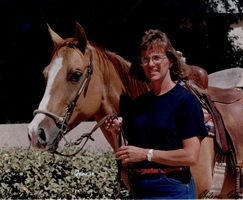